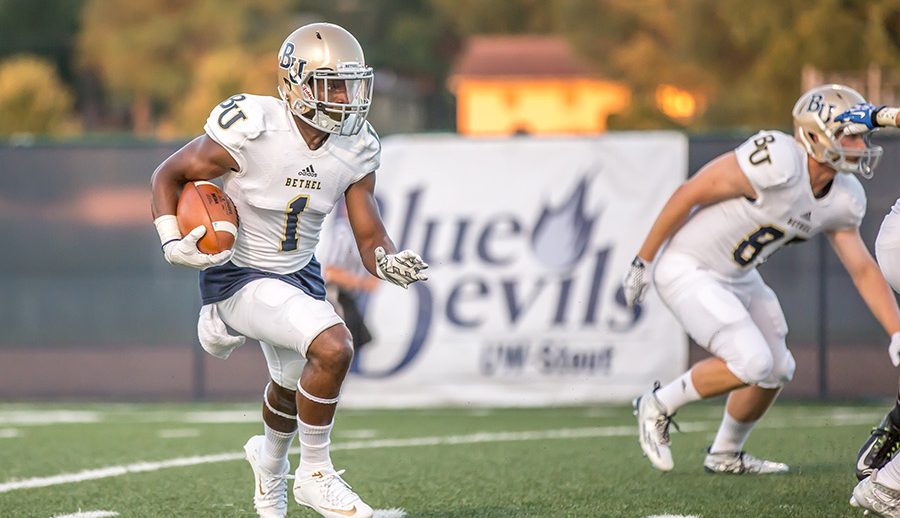 Come and join the Bethel University Royals Summer Football Youth Camp. It is a two-day football training program that will run from the 12th of June until the 13th of June. The daily schedule is set to start at 9:00 AM and end at 3:00 PM. This football camp is open to all and any boys in grade 3 up to grade 8 who desire to learn football. Moreover, this football youth camp is going to take place at the leading-edge Royal Stadium which is on the Bethel University campus. The program is putting emphasis on fundamental skills development and confidence building. The registration fee which includes lunch and camp t-shirt is $120 per camper.

Furthermore, this training program will be under the supervision of the Bethel University Royals college football coaching staff. Current and former Royals football players are also going to attend and help facilitate the program.

Bethel University is a private, coeducational, evangelical Christian, liberal arts university in Arden Hills, Minnesota. It is a proud member of the Christian College Consortium (CCC), the Council of Independent Colleges (CIC) and Converge, an evangelical Baptist body. Bethel University is also a member of the National Association of Independent Colleges and Universities (NAICU) and the Council for Christian Colleges and Universities (CCCU). Currently, its undergraduate enrollment is around 3,000 with a 38 percent male and 62 percent female students gender distribution. This student population is through a selective acceptance rate of 82 percent. Correspondingly, Bethel University’s student to faculty ratio is 11:1. Bethel University is one of the region’s top universities. As a matter of fact, it is 11th in Regional Universities Midwest, 2018 edition of the US News and World Reports Best Colleges rankings. It is also 9th in the Best Colleges for Veterans category and 27th in the Best Value Schools category. Moreover, Bethel University fields 18 intercollegiate men’s and women’s sports teams in the Minnesota Intercollegiate Athletic Conference (MIAC) of the National Collegiate Athletic Association (NCAA) Division III. They are the Royals and their identity colors are navy blue and vegas gold. James H. Barnes III, Ed.D. is the university president.

The Head Coach of the Bethel University Royals college football team is Steve Johnson, a native of Chicago, Illinois. He is now in his astounding 30th season at the helm of the Royals football program. Coach Steve Johnson is a bachelor’s degree in Physical Education graduate from Bethel College. Meanwhile, he earned his master’s degree in Physical Education/Sports Psychology at St. Cloud State University. Ultimately, Coach Johnson is a six-time MIAC Coach of the Year awardee. He is also a three-time West Region Coach of the Year. Coach Steve Johnson is now owning an overall coaching win-loss record of 218-100-1.