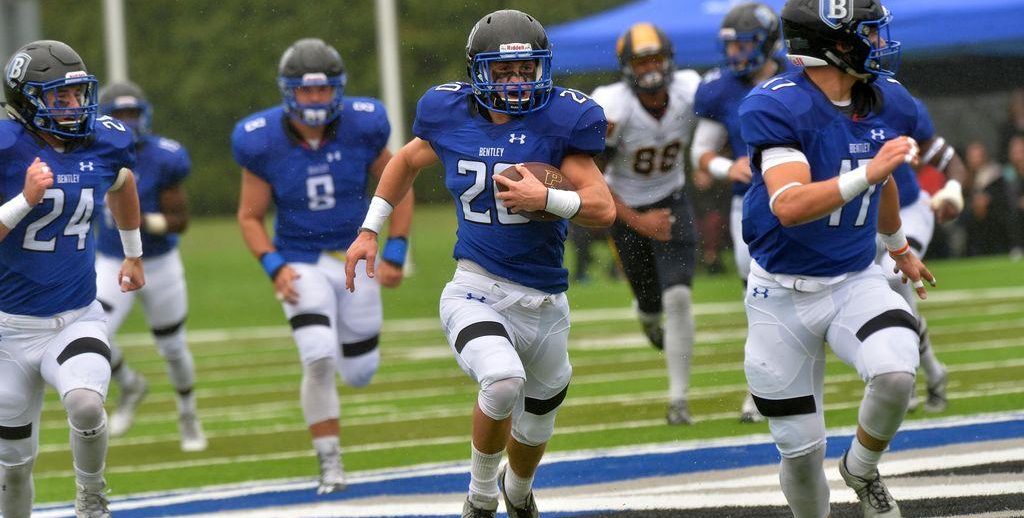 The Bentley University Falcons One-Day Football Clinic is going to fall on the 27th of June. The program is set to start at 2:30 PM. This elite football clinic is open to all boys who are looking to improve their football skills through a fun but challenging training environment. It is going to take place at the scenic Bentley University campus. In addition, this football training program emphasizes the development of the player’s individual and position-specific skills. There will also be competitive games. Instructions and groupings are in accordance with the participant’s age and skill level. This clinic will emerge the players to Bentley’s daily practice routines. Overall, this event will be a fun and challenging training experience. The camp registration fee is 475 per participant.

Furthermore, this training program will be under the supervision of the Bentley University Falcons college football coaching staff. It is important to note that this is a “helmet only” but “non-contact” football clinic.

Bentley University, originally Bentley School of Accounting and Finance, is a private, coeducational university in Waltham, Massachusetts. Its name is in honor of Harry C. Bentley, its founder, and first school president. Presently, the university is serving more or less 4,200 undergraduate students. This undergraduate student population is through a more selective enrollment acceptance rate of 46 percent. Correspondingly, the university’s student to faculty ratio is 12:1. Bentley University is also serving around 1,400 postgraduate students. Moreover, the university is 2nd in Regional Universities North of the 2018 US News and World Reports Best Colleges rankings. It is also 4th in the Best Value Schools category. In sports, Bentley University fields 23 intercollegiate teams in the Northeast-10 Conference of the NCAA Division II. They are the Falcons and blue and white are their identity colors. In addition, the Bentley Falcons football team has already made it to two NCAA Division II playoffs. The team’s home field is the 4,800 capacity state of the art Bentley University Football Stadium. The program’s inaugural season was in 1972.

The Head Coach of the Bentley University Falcons football team is Bill Kavanaugh, a native of Dartmouth, Massachusetts. He is now in his sixth season at the helm of the Falcons football program. Coach Bill Kavanaugh is an alumnus of Bentley University. Meanwhile, he completed his master’s degree in educational leadership at Stonehill College. Coach Kavanaugh was a standout during his college playing years. In fact, he is the 2002 Football Gazette Division II Mid-Major Defensive Lineman of the Year awardee. He was also a 2002 Football Gazette Division II Mid-Major All-America awardee. Coach Bill Kavanaugh is now holding an overall coaching win-loss record of 21-22.